Skip to content
Homegold ivestingIf Inflation Is So Bad, How Come It’s Not Worse?

IF INFLATION IS SO BAD…

Recent headlines have many people despairing over inflation.

A couple of recent examples such as “Inflation Is The Worst It’s Been In Forty Years” and “Consumer Prices Are Rising Rapidly” were followed by “High Inflation Is Here To Stay”.

Just how bad is it? Let’s take a look. 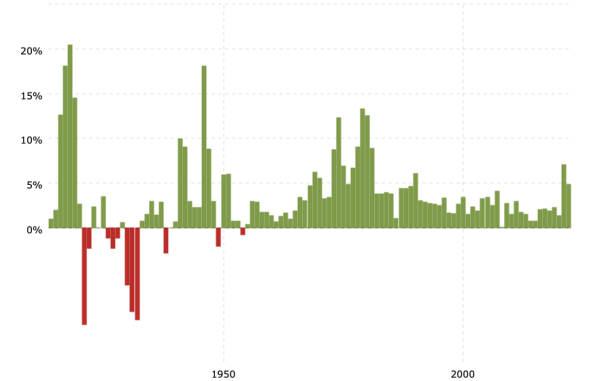 The CPI rate of increase for all of 2021 was 7.04 percent. Coming on the heels of 2020’s 1.36 percent and after forty years of historically low CPI rates, 2021 may be viewed by some as “nightmare inflation”. Still, it doesn’t likely justify the headline proclamations that stir up fear and anxiety among the general population.

There are several things to consider before getting worked up about what one reads regarding recent “high inflation”.

First, most of us tend to remember largely what has happened most recently and forget or ignore that which may require a bit of effort to uncover.

When viewing the 2021 CPI rate of 7.04 percent in the context of longer-term historical rates, the number doesn’t seem quite so extreme.

It is true that the spike higher in 2021 was a five-fold increase over 2020; but that is not the whole story.

Part of the reason for the jump in prices last year has to do with supply chain disruptions associated with reopening of the economy after being shutdown for  a year or more.

Supply chain disruptions can cause an imbalance in supply and demand. The resulting effect on prices has nothing to do with inflation. (see Simple Facts About Inflation)

Nevertheless, the CPI rate dropped in half the very next year to 3.06 percent and ushered in thirty years of historically low CPI rates.

In all cases where extreme increases in the CPI rate are apparent, they were followed by years (decades) of lower rates of increase.

In addition, after the CPI rate peaked in 1918 at 20.44 percent, it has trended downward for the past one hundred years.

The inflation created by the Fed is losing its intended effect. The biggest risk is not significantly higher inflation.

Kelsey Williams is the author of two books: INFLATION, WHAT IT IS, WHAT IT ISN’T, AND WHO’S RESPONSIBLE FOR IT and ALL HAIL THE FED!