It’s a distinct possibility things could get worse.

Which raises a natural question: how does gold—and all precious metals for that matter—perform during these events?

If we use history as a guide, there’s a clear tendency with all of them…

The most common definition of a recession is two consecutive quarters of negative gross domestic production (GDP). Given the way it’s calculated, it is a lagging indicator—we don’t know we’re officially in one until six months has passed (those claiming we’re in one now could easily be right).

Since 1970, there have been eight recessions in the US. We measured how each of the major precious metals—gold, silver, platinum, and palladium—performed during the official time frame of each recession.

First up, here’s how gold has performed during each of those periods of negative economic growth. 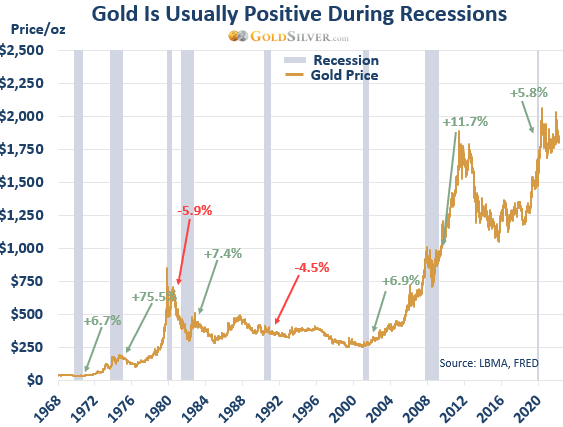 In six of the eight modern-day recessions, the price of gold was higher at the end than when it began. The two declines were mild, with the 1980 one occurring just after its biggest percentage gain in history.

This makes sense when you think about it. A slowing economy usually increases fear among investors, and gold is a natural refuge when uncertainty strikes.

A recent Bloomberg study also compared gold to the S&P 500 during each of the last seven recessions. In their study, they examined the two-year period around each recession—the 12 months before it started to 12 months after it began—and found gold outperformed the S&P 500 by about 50% on average.

Let’s look at the other precious metals…

Here’s how silver has historically performed during recessions. 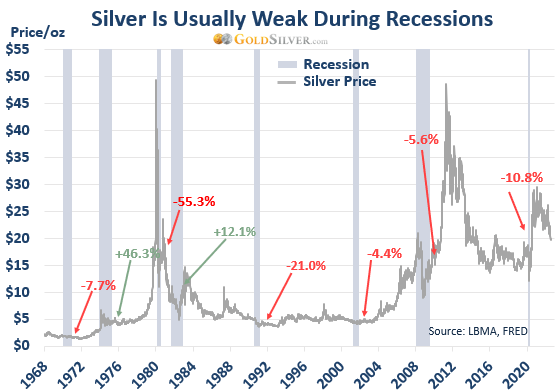 Silver has not fared as well during recessionary periods. This also makes sense when you think about it, since roughly 55% of all silver goes to industrial uses, and commerce slows during economic downturns. 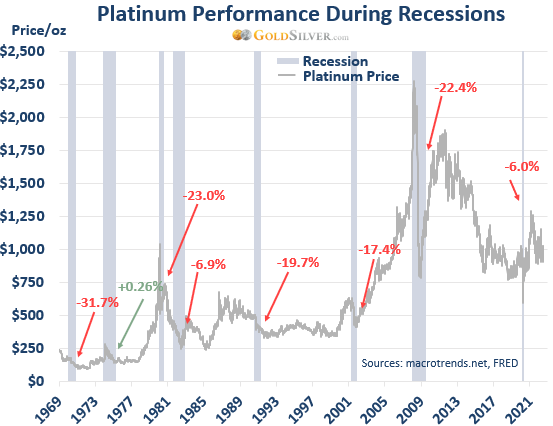 Platinum has fallen in every recession since 1970, except once when the price was flat. 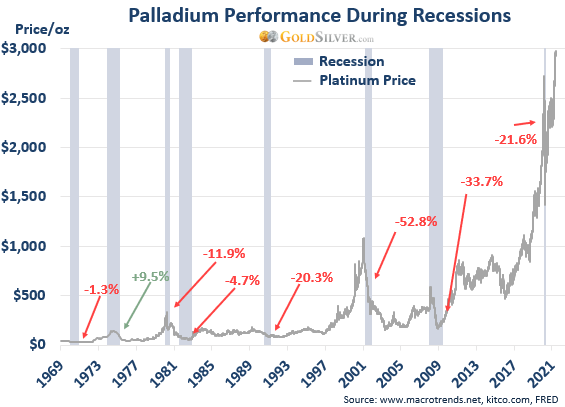 Palladium has likewise fallen in every recession except one.

Since roughly 90% of all platinum and palladium is used in vehicles, it’s not surprising they have fallen during recessions, when automotive demand would decline.

A stock market crash can be hard on an investment portfolio. Do precious metals help?

This chart measures how each precious metal fared during the specific timeframe of each crash. 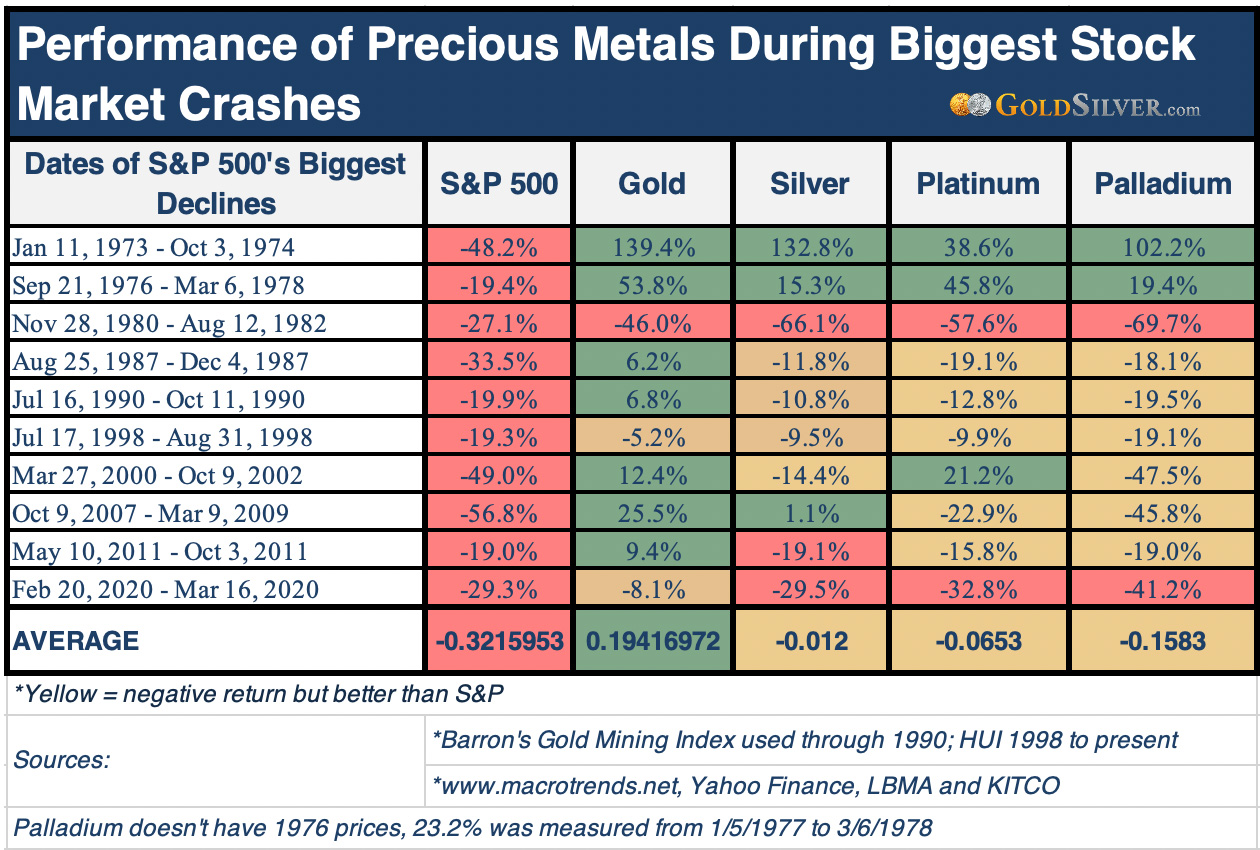 History shows that gold usually rises during stock market crashes. Of the three times it fell, two were less than the S&P, and the only one greater was coincidentally just after its biggest price rise in history.

Silver is a bit more of a mixed bag. It usually declines when stocks sell off, though half of the time that decline has been less than the S&P.

Keep in mind this measures performance only during the crash itself, not what happens afterward.

The historical record shows that gold performs better than other precious metals during recessions and stock market crashes. When fear and uncertainty strike the economy or markets, gold has served as a natural hedge. This is one of the reasons we encourage everyone to own some gold, along with their silver.

Gold is more than a fear trade, though. It’s money. That fact will become more and more clear to everyone as the monetary system gets weaker and weaker. It’s a once in a lifetime transition that will make each one of us either a victim or a victor.

The path to being a victor is clear. Own humankind’s oldest form of money.

Here’s an easy and inexpensive way to accumulate it.

An active investor with a love of writing, Jeff Clark is a globally recognized authority on precious metals. As the son of an award-winning gold panner, with family-owned mining claims in California, Arizona, and Nevada, Jeff has deep roots in the industry. Jeff regularly speaks at precious metals conferences, serves on the board at Strategic Wealth Preservation in Grand Cayman, and provides exclusive analysis and market commentary to GoldSilver customers. Follow Jeff on Twitter @TheGoldAdvisor