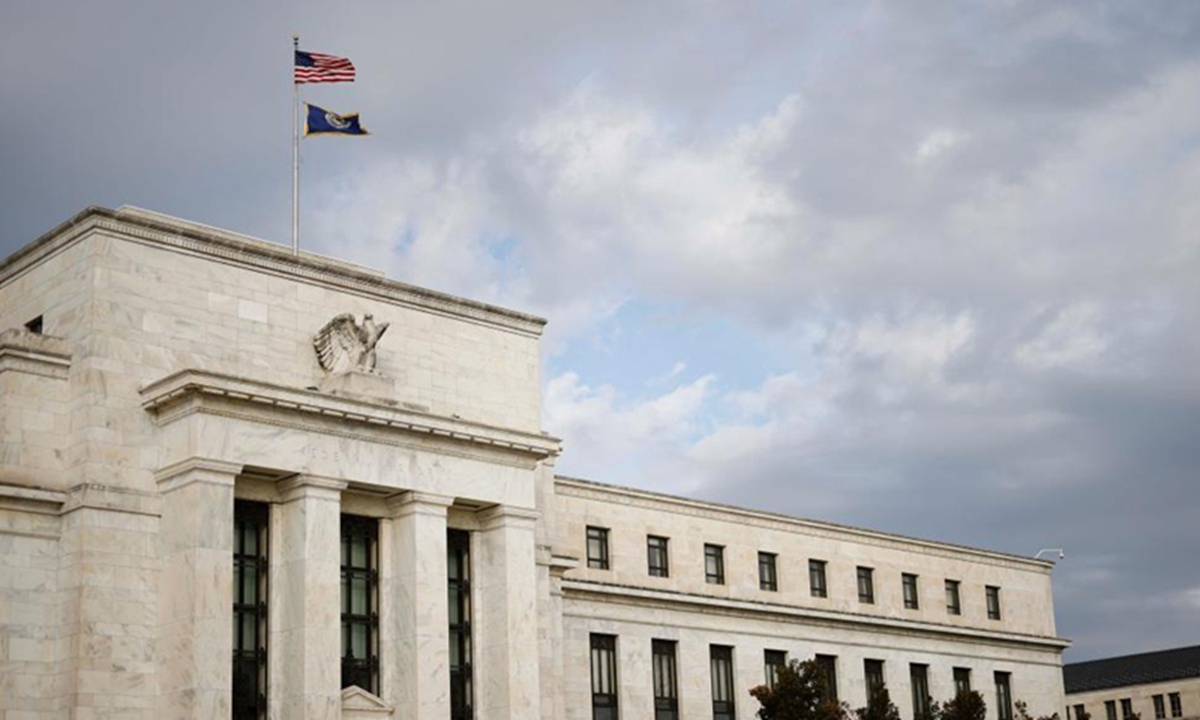 The US Federal Reserve in Washington, D.C., the US Photo: Xinhua

Brent Neiman, a counselor to US Treasury Secretary Janet Yellen, urged China to “take part in coordinated debt relief for vulnerable nations to avoid the specter of a systemic sovereign-debt crisis,” Bloomberg reported on Wednesday.

This adds to the growing rhetoric coming out of Washington that aims to shift the blame for debt crises in some developing countries that have been partially caused or exacerbated by the US’ abuse of its dollar hegemony and irresponsible monetary policies.

Ironically, Neiman’s remarks came just before the US Federal Reserve was holding a meeting to prepare to raise interest rates again. It is very unlikely that Neiman, as an economist, can’t understand the potential blow caused by another Fed rate hike on those already struggling emerging economies. Yet he only repeated cliché claims and finger-pointing. It is unprofessional, irresponsible and illogical.

While many Western politicians and media outlets are keen to point the finger at China, a close look at how some developing countries’ debt problems have come about and become worse shows that the US is the actual source and real creator of their debt predicament. Since the 1980s, the US expansionary monetary policy and sharp dollar appreciation have been behind every round of debt crisis in the developing world, such as the Latin American debt crisis and the Asian financial crisis. And this time is no exception.

In essence, the US is using its dollar hegemony to make the world pay for its irresponsible monetary policies. The reason why the Fed has adopted a strong dollar policy to tame inflation is because the US’ blind and unlimited money printing agenda aimed at maintaining “prosperity” led to the inevitable consequences of high inflation.

Due to the impact of the COVID-19 pandemic, many developing countries are already facing significant downward economic pressure. But it was against this backdrop that the Fed started its aggressive interest rate hikes aimed at curbing domestic inflation that has hit a 40-year high. As a result, the US dollar has appreciated sharply against other currencies, with the US dollar index at its 20-year high, thus accelerating the currency depreciation and international capital outflow in developing countries. For many countries facing debt problems, the Fed’s strong dollar policy could be the straw that broke the camel’s back.

Since most of the debt held across the international financial market is denominated in dollars, a dollar appreciation directly increases the financing costs and debt-servicing burdens on developing countries.

Moreover, a strong dollar points to depreciation of other currencies, making imported goods more expensive for developing countries. And higher imported inflationary pressure has limited these countries’ ability to adopt stimulus policy, increasing the risks of an economic recession and further weaken their ability to servicing the debt.

In addition, the US has abused unilateral sanctions and long-arm jurisdiction, endangering the stability of global supply chains and industrial chains, further exacerbating some developing countries’ debt-servicing capability.

In this sense, the US is largely to blame for the debt problems facing the emerging economies. US politicians’ and media outlets’ claims and accusations against China are based on the ulterior motive of scapegoating China and shirking their own responsibilities.

China has the right to handle the debt relief issue at its own pace and on a case-by-case basis. China’s efforts on debt relief for developing countries are steady and effective. Last month, China announced the waiving of 23 interest-free loans for 17 African countries that had matured at the end of 2021. On Monday, Ecuador said it has reached an agreement to restructure its debt with Chinese banks, providing relief worth some $1.4 billion until 2025. The US has no right or qualification to point finger at China’s debt relief efforts to help other developing countries.

Lastly, as another US interest rate hike would further exacerbate debt crises in some countries, they will have the growing urgency that they need more coordination on debt settlement in other currencies to break the dollar’s dominance in global financial markets.