Homebuilder sentiment transmitted to reality in the October housing starts/permits data released this past week. Housing starts declined 4.2% in October from September. Wall Street thought starts might drop 2.7%. The September starts number was revised lower to -1.3% from August. Single-family starts plunged 6.1% to the lowest level since May 2020. In addition, housing permits fell 2.4% from September to the lowest level since August 2020.

This chart shows why I continue to pound the table on homebuilder shorts and why I believe that homebuilder valuations still have a long way to fall: 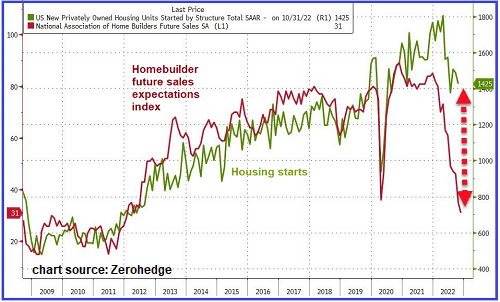 The chart above shows the homebuilders’ sentiment futures expectations index (red line) vs October housing starts (green line). Both metrics ultimately reflect actual home sales activity, thereby signaling a continued decline in home sales – new and existing. This data likely will continue to head south, as the U of Michigan’s consumer sentiment survey for November showed that consumers regard current home buying conditions as the worst in the history of the data series, which goes back to 1978.

October existing home sales released Friday were crushed, down 5.9% and from September and 28.4% YoY on a SAAR basis. Existing home sales have declined nine months in a row to the lowest SAAR rate since December 2011. On a not seasonally adjusted basis, sales were down 13.3% from September (some seasonality in that number) and 29.5% YoY (no seasonality in that number).

I would argue that the YoY not adjusted number statistically reflects more accurately the degree to which the housing market is contracting. Single family home sales (not including condos/co-ops) fell 6.4% MoM on a SAAR basis and 29.1% on a YoY not adjusted basis. Using the NAR data for median sales price, YoY for October the median price is still 6.2% higher. But the price is down 8.5% since its peak in June 2022.

This is why I continue to be baffled by the valuation levels of the homebuilders. The only rationale I can conjure up is that a large segment of perma-bull investors is convinced that not only will the Fed pivot soon but that a pivot with more QE will revive the housing market. But in 2008 it took nearly three years after QE began before the DJUSHB began to begin a bull market run.

The housing market crash is thus starting to accelerate. If I’m wrong, how come insiders have not been buying shares of their companies in the open market after the 30-40% decline from the late 2021 highs? I went through the SEC form 4 filings for DHI, PHM, LGIH, TOL, LEN, KBH and BZW. Not one open market purchase in the last 12 months. The “buys” are zero-cost options exercised and the shares are immediately sold. The amount of insider selling in the sector is breathtaking, if not embarrassing.