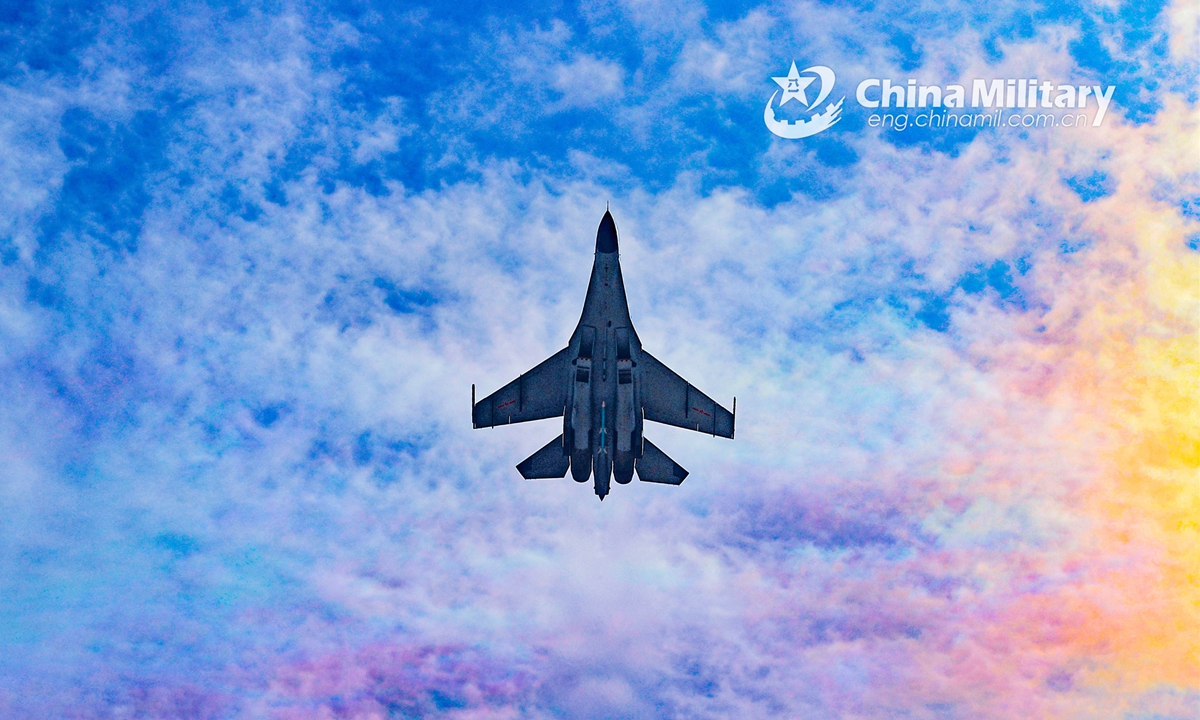 A fighter jet attached to an aviation brigade under the PLA Air Force soars into the sky for an air combat training exercise on March 19, 2022. (eng.chinamil.com.cn/Photo by Cui Baoliang)

The Chinese People’s Liberation Army (PLA) Eastern Theater Command announced on Wednesday that its forces shadowed a US destroyer when the latter made a transit through the Taiwan Straits on Tuesday, slamming the US move as a provocation that intentionally sabotaged peace and stability in the region.

Analysts said that the PLA operation displayed its full control of the situation in the Taiwan Straits as well as its capability and determination to firmly safeguard national sovereignty and territorial integrity.

The PLA likely dispatched both aerial and naval forces for the mission, and had the whole situation under control, a Beijing-based military expert told the Global Times on Wednesday, requesting anonymity.

Two PLA J-16 fighter jets entered the island of Taiwan’s self-proclaimed southwest air defense identification zone on Tuesday, the defense authority on the island said in a press release on the day.

Also on Tuesday, the Type 054A guided missile frigate Zhoushan and the Type 071 amphibious landing ship Yimengshan made a transit through the Miyako Strait from its southeast to its northwest, according to a press release by Japan’s Ministry of Defense Joint Staff on the day.

This means that PLA warplanes and warships were operating in both the southwest and northeast of the Taiwan Straits on Tuesday, observers said.

Repeated US provocations like this send wrong signals to “Taiwan independence” secessionist forces, intentionally sabotage peace and stability in the Taiwan Straits, and the theater command strongly opposes such actions, Shi said. The troops are on high alert all the time to resolutely safeguard national sovereignty and territorial integrity, Shi said.

The US has been repeatedly sending warships through the Taiwan Straits on a monthly basis, and the PLA has conducted similar missions to track and monitor them every time, so they do not have any opportunity to make any dangerous moves, the expert said.

Ma Xiaoguang, spokesperson at the State Council Taiwan Affairs Office, said at a regular press conference on Wednesday in response to the US warship transit that the Taiwan question concerns China’s core interests, and China will not allow and resolutely opposes any external interference.

During the phone call by Chinese State Councilor and Defense Minister Wei Fenghe and US Secretary of Defense Lloyd Austin a week ago, Wei reiterated the importance of the Taiwan question, stressing that Taiwan is an inalienable part of China, and it will bring a disruptive impact on China-US relations if the Taiwan question is not handled well.

If the US is to promote the implementation of the important consensus reached by China and the US’ top leaders on March 18 as Austin’s promise to Wei, which includes that the US does not support “Taiwan independence” as US President Joe Biden has pledged, the US military should stop sending vessels or aircraft through the Taiwan Straits, experts said.